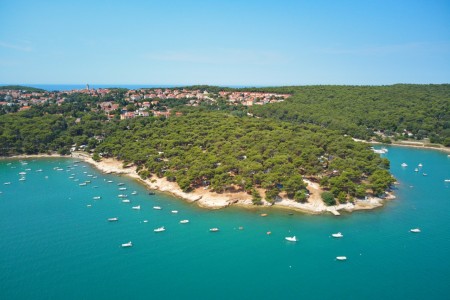 The camp site has existed since 1963 and is one of the first camp sites operating in the area of Premantura. In the first three decades its guests were mostly young Slovenes and foreigners from European countries, students, and also families. While spending their holidays in the nature in a simple way, they did not mind occasionally taking a shovel or a wheelbarrow and helping to build the camp site. Socialising on sport courts, at work or when having fun, they forged deep friendships and first loves emerged.
Many of them are still returning as guests or visitors to revive old memories.

After the independence of Croatia, the company Kranjski kamp d. o. o. was registered in 1992 in Croatia and took over the camp site for further management. In the last five years we have started gradually renovating the camp site and adjusting it to the new needs, guests' demands and new standards. First we renovated all joint sanitary blocks, children's playground, basketball court, decorated the surroundings with new plantations of trees and ornamental plants. We have asphalted the access path, arranged the beach and new pitches for camping.

The camp site still retains a pleasant, homely, family atmosphere, which attracts guests who keep coming back again and again.

Photo gallery of the camp history